I live in Copenhagen. Last years’ first fishing trip was on Good Friday with my girlfriend Johanna, and  my bass player friend Joel. It was a nice and we caught some cod on a spinning rod, so I thought it could be nice to make it an annual event to go fishing on easter, and maybe even start a new tradition.

By now, Joel had also gotten into fly fishing, so this time we would be fly fishing for trout instead of spinning fishing for cod. Even though I have tried many times, I had not ever caught a seatrout except for one of 2.2kg in a Norwegian salmon river Repparfjordelva. My coastal fly fishing experiences have always drawn a zero-result. I knew that Denmark is supposed to be one of the best places to catch the big seatrout, but for that we needed to get out of Copenhagen so the plan was to rent a car for that day. I made a waterproof plan with some second hand knowledge of where the trout should be, and how to catch it. Also there was some limitations since we only had one day. Here’s how I made the plan:

Everything had gone almost according to plan and we were ready at the beach at 11:30, and everything was looking good. The turquoise water, slight sidewind breeze, high tide – we had all the parameters.

Me and Joel were going with waders and fly fishing while Johanna was fishing with the spinning rod. We didn’t feel anything. We saw nothing. Still it felt very promising. The place was very beautiful and the weather was good, so we moved along the coastline and had lunch.

We met some Danish fishermen, who used to fish there for years. I asked: “Have you caught anything?” “-No, I haven’t… I think the best time was in the morning or then in the evening. I don’t think anything is going to happen at mid day.”

Okay, maybe we were too late then. But surely there must be some fish active later in the day. or the evening. At least the weather was perfect.

We met some other local fishermen and I asked: “Did you catch?” They replied: “Well… Not this time. The weather is too good. Too much sunshine. Too little wind.”

It seemed like every time I was fishing for seatrout, there was something wrong. Maybe it was the bad planning, or really ugly weather, or too cold or too warm, or just wrong place. But this time I had the feeling that maybe the conditions were just too good.

So the rest of the day was business as usual, lot’s of casting practice and no fish.

And once again the only question I had in mind was: Where is trout?

Well. It was good times anyways, and having fished for seatrout for dozens of hours without catching, I didn’t expect much either. It was fun to try out my father’s old Takumar lenses. I had the 105mm f/2.8 and the 35mm f/3.5. Nice and sharp lenses – I must say, and very good manual focus rings.

If you have gotten some seatrout, and know how to find one, and even catch one. Please help! If you have some advice, what went wrong this time, and what we should have done differently, please tell me!

For me, the seatrout remains a myth, and I will continue to investigate. I will have to build up my confidence with something that I know I can catch, like the arctic char, or the brown trout. Please submit your advice in the comments below, or by email to address jazznflyfishing@gmail.com. 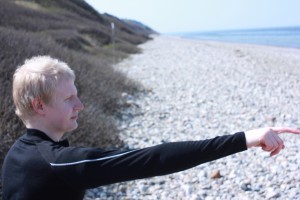 Maybe trout is there? 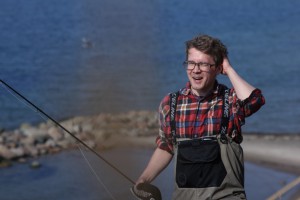 Joel wondering - Where is trout? 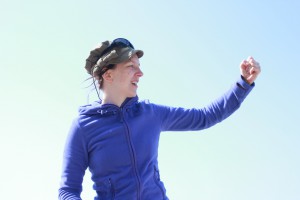 Johanna lifting the imaginary 2,5kg by the tail 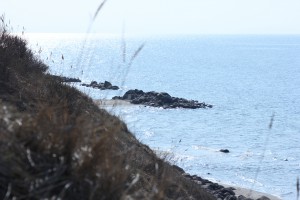 Where is trout? Where is wind? Next time – fish the wind side, cast into the wind. Get trout. Get smile. Get kosso.

Sorry Tap, can’t help you there. I guess Fredrik’s windside trick works sometimes, but it sure didn’t work on the Swedish westcoast a couple of weeks when we all (including Fredrik) tried our bestest and failed miserably… (There was something about a hat, too. Hungry, Fredrik?) The ocean is a big place – I guess that’s the real problem.

However, I can report that during my easter vacation in the mountains up north, I found the arctic char! Since the water was covered with 1 1/2 meters of ice, it was hardly fly fishing, but it was a lot of fun anyway. I’ll post a report shortly.

I will try the wind side next time. I think waking up at 4:00am might also help. But I’ll be still having my expectations low.