The picture of the monster trout on the previous blog made some people suspicious. Was the picture somehow manipulated? Or was the fish really that big? The answer to both questions is yes. The picture has been digitally manipulated, but the size of the fish is real.

We’ve had countless discussions about how a picture of a catch should be taken. A big and fat fish appears big, fat and beautiful in a good photo, but you can also ruin the shot pretty easily.

One of the biggest and prettiest trout I ever caught was captured on camera. Too bad my pose was terrible as I’m blocking the view to the fish with my arm. The trout is also partially under water which makes it even more difficult to admire the fat and firm belly of the fish:

Here are some hint for better pictures:

One of the lakes we were fishing was overpopulated by small trout. We caught some trout for dinner, and took a couple of photos of a 25 cm trout with a regular compact camera with a wide angle lens. The picture doesn’t lie, or does it? 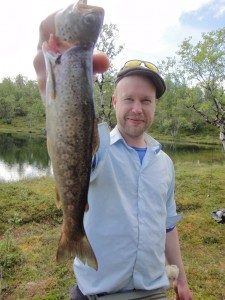 Trout in front of Håvard 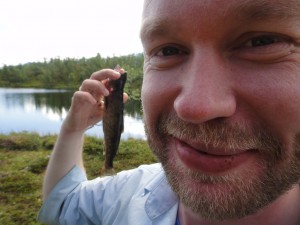 Håvard in front of the trout

Finally, some photos from different points of view:

The photoshopping of the trout? The picture was cropped, the line was ”removed” from the picture and Håvard’s finger tips were cut in from another photo. But the fish is in natural size. It’s all about perspective. 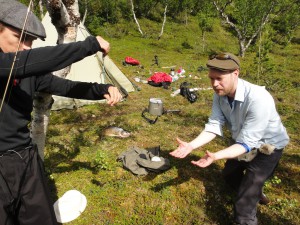 This was the trick 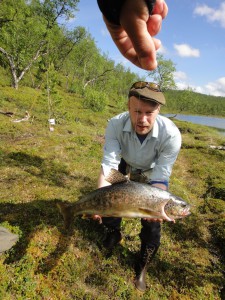 That is a very cunning use of photoshop, I’ve been scratching my head trying to figure out how you got all the lighting write, lol. When ever I take photos of fish I catch they always turn out rubbish, but thats what you get when you try and use your phone!

ps. Joona that trout must have been massive!

Kind of of like a ghostfish – it leves no shadow.

Yeah, the shadow is interesting;)
Nice to hear from you, Pål! Hope your season has been good. You had a good start of the season at the Upper Itchen, I heard… That river is amazing in the early season.

Of course with a genuine nice trout, you won’t be needing all these cheap tricks 🙂

The Karhu-kalja seem to be the perfect size in the photo. One can of beer – one hell of a night (or day). 🙂