Power plant – Do you like that word? How many beautiful rivers and landscapes have been destroyed because of the human hunt for money. More money. More, more and more.

Or is it really about the money? Sometimes it feels like some people never get satisfied, they simply have to destroy something. In a world with global nature problems, it should be easy not to destroy anything more. It should be very easy.

This time the Swedish government, led by Mr. Fredrik Reinfeldt, is planning some scary stuff. They’re aiming to build a new power plant in a nice little village called Arjeplog in northern Sweden. In fact, Arjeplog already has one power plant. The strange thing is that many locals in the Arjeplog area also want to build the power plant. I suspect that everybody in this little fairytale don’t know about the consequences when building power plants… or maybe they just don’t care.

Reinfeldts government are lowing the taxation of the population. The rich part gets more rich and so on. With other words, Sweden is losing some money at the same time. Other people have to fill that gap. And so is apparently the nature – in this case Arjeplog, because of the new power plant. Or how was it – is this really about the money?

One small detail is that the water running through Arjeplog contains some of the biggest and most beautiful trout in Europe. That tribe is unique and Arjeplog has a very well working sport fishing industry. Every year thousands of people go there to get their dream fulfilled – to catch the big one. It is not unusual with fish around 7 – 8 kg. Now the trout tribe might be cut down in numbers with 30-50 %. I’m talking only about the trout, then we have all the other species, insects and animals. 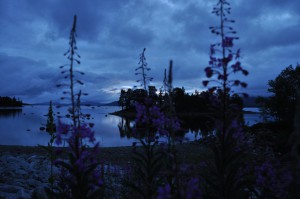 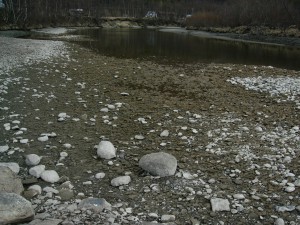 How it can look a couple of kilometers away 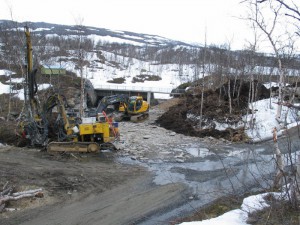 It is important to mention that many locals are also against the power building plans. Actually, people all over Sweden are angry about this idea. But most of us Swedes don´t know about it yet, and that´s why we must spread the word. Please do the same thing!

Carry on the excellent work guys!

Something has to be done, how can a company can literally shut off the flow of a major river but we can be banned for using a hose pipe in the summer? This kind of thing happens alot in the Uk I just read in Fly fishing, fly tying magazine that the Scottish Hydro company wants to take 30% of the flow of the River Doon one of the best Salmon rivers Scotland. The Chalk streams of the south also suffer from abstraction for industrial farming.

I know I don’t think everyone knowes there is always a draw back to every form of energy and power prodution. Because its labbled green its ok? My home river is called the Tees, it has the most amazing fly water, over the last 100 years they have built over 5 reservoirs to supply water for the steel and chemical industry, but now they form some of the best stillwater fly fishing in the region, three of the are purly the home of wild brown trout. The main river also benefits from the extra flow during the summer. So sometimes the effects of the hand of man has some good points, but one cannot wonder what we have lost

Yeah, you´re right, Graham. If you ask me, the worst part is that they label this as green energy. In their commercials, the energy companies always have pictures of pristine, untouched waterfalls and rivers… That really makes me angry.
Of course, most people will realize that the rivers and waterfalls aren´t there anymore if they think about it for a while.
But I fear that most people don´t think about it, so these commercials are probably very effective.

Sometimes you get positive effects, too, like warmer water in winter. Sadly, that will not be the case in Arjeplog. As there is no dam, only turbines in the running water, this kind of powerplant will just destroy a big part of the river.

Thats terrible, I know that the building of this power plant will bring money and a few extra jobs, but surely tourisum and visiting fisherman will bring much much more to the area?

Graham – sure thing, fishing tourism is still in a developing state in the north and has an enormous potential. It will create lots of jobs and bring money for the area. Obviously the powerplant would also be economically successful, but damaging the whole ecosystem and the nature is a too high price to pay.

I think your right Joona, truly wild rivers and landscapes are becoming harder and harder to find and all I starting to show the scars from the hands of man. These unique places need protecting more then ever before if we want to have anything left!