After days of intense scrutiny in the drama-filled dark of my private projection room, I have finally arrived at a decision in the planet-wide J&FF Shadowcasting Competition. I won’t waste any time getting to the point: The boys at J&FF furnished me with what they considered the three finalists, and I decided that #2 — “Shadowcasting in Bartelva” — is the video to take the overall prize. Now, that said, I *do* want to waste some time talking about the decision:

While lacking traditional Hollywood production values such as multiple camera angles (or for that matter, much in the way of editing), this film does have two strong suits that ultimately tipped it to be the winner. 1) There is a fish hooked. 2) There is a fish landed. That’s a 150% bonus onto the base rating, which allowed this video to just edge out the second place finisher, #7 (“The Stealth Shadow Cast”). The pastoral soundtrack also balances nicely against the tension developed with the obviously well-practiced and highly skilled shadowcasting. Multiple variations of the shadowcasts, however subtle they may appear to even the trained eye, also made the Bartelva vid worthy of repeat viewings. In addition to the Best Picture award, I must also give this film the Best Documentary award (for real, on-camera fish-catching). Many anglers could learn a thing or two here, and the fact that the fly stayed on the leader during the various casts indicates that our actor is a master of force application in fly casting (or is lucky). ***1/2 (the fish catching added the extra, winning star).

This video was in the early running as #1, partly because I watched it first and am lazy. The dramatic close-ups of the steely-eyed protagonist, coupled with the fact that the actor did his own stunts (his casting speed was breathtaking!), were highly convincing aspects of filmmaking. If my decision was based on actor-cred alone, I likely would have gone with this vid as #1. As it is, I still must give the Best Actor award here, as well as Best Make-Up (flowers—brilliant!) and Best Stunts. Had a fish been caught (even a stunt-trout), this would have been our winner. But…the awards criteria demand that I weight fish-catching heavily, so #7 becomes #2. ***.

Avant-garde and daring! A couple of minor issues: No water, no fish, no caster, and no shadows. Did I mention avant-garde and daring? The filmmakers may have also simply misunderstood the concept of “shadow” in the shadowcast, and instead just went ahead and invented the “anti-shadow shadowcast.” And to be fair, where would we be without those willing to push the boundaries? This definitely wins the Best Cinematography, Best Editing, and Best Visual Effects awards, but is not in the Best-Picture running (due to the aforementioned lack of water, fish, casters and shadows). Now, that said, I am going to step aside from my pseudo-serious review for a moment and say “bravo!” For real. This, to me, is truly beautiful—a real art-piece on fly casting. Nicely done. * for actual shadowcasting; **1/2 for inventing anti-shadow shadowcasting;  **** for production.

I must also say that film #1 (“Thorvald´s first Shadow Cast”) deserves an Honorable Mention. And to all who entered, your brilliant and *very serious* efforts involving modern shadowcasting must be held up as examples of fearless exhibitionism. Not just anyone is willing to reveal such high-art unfiltered. It takes guts to show off your casting skills like that, but in the end, the fly-fishing world is better for it! 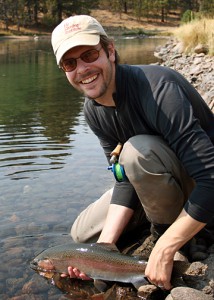 My best to all,
JB

On behalf of J&FF: Big thanks to our head judge, without whom this wonderful competition would have been far less wonderful! We´ll have to figure out some way of thanking him for this… Guys?

hey Jazz-Dudes !
those where my picks too, you should thank Jason for thinking just like me ! 😀
marc

Thank you so much guys, and a good job by the other contestants as well. The stealth shadow cast really made me laugh!
I cant wait to get my hands on the prize, I have a #4 fario now, but the #6 rod will come in handy for next years trip to Croatia.
The only way I can try to give my thanks is to take you fishing next time you’ll be around Trøndelag. 🙂

Congratulations Stig, and the fantastic runner-ups! And a BIG thanks to all participants! Thanks to you, the world of fly casting will never be the same again 😉

Great success! I think we should make this an annual event!

It was my honor to judge such an important global event—especially an event that concerns such a deep and worthwhile cause. Knowing that you enjoyed it is thanks enough for the likes of me….

It is also my hope that this event, and in particular, my commentary on the winner and the first and second losers, will not be taken *quite* as seriously as the original video that kicked this whole thing off. It may still come as a surprise to some, but reading any and all of this shadowcast business with one’s tongue firmly in-cheek might produce the most favorable results.

And just in case any contestants are wondering, yes, your reviews are not too serious, either. Except for that part where I said I was totally being serious…or was I?

Regardless, in my eyes everyone is a winner—it’s just a matter of degree. Eternal fly casting glory to all!

Stig—Yes, congratulations on your winning vid! As for your prize, that’s more of a real River Runs Through It type of rod. Something stout and strong and ready to toss Bunyan Bugs on big water. I’d say to use that rod in next year’s SC Comp—it should now have plenty of built-in mojo!

A new Shadow Cast by the the Grand Master himself! Now we really have to arrange a new SC Competition next year…

A new Shadow Cast from me? Are you so sure the world would be ready? I’m not so sure I would be ready. Especially if I had to catch a fish on top of it. I do OK as a pitiless, iron-fisted judge, but I wonder if I have the mad skilz needed to cast-match the brilliance seen in this contest…. 😉

I nearly had an underpants accident when i watched the stealth shadow cast. utterly brilliant.