Especially on YouTube, where haters and lovers leave their comments on a regular basis. In fact, some viewers were getting so heated up by this little video that we had to start moderating the comments!

Some of my favourite comments:

His haul is﻿ shite.

“But there are situations.” – hahhahahhhahhahhaha 🙂﻿

Stupid cast…no, there are﻿ not situations. Idiots!

So you manically slap the water with 20′ of line, lose contact with it, and slop a slack line forward, instead of an easy back/forward cast? Why?…If it’s intended to make fun of fly fishing, it’s just lame. Fine material for short attention span Youtuber’s, I suppose.﻿ Don’t perfect a craft…”Post” and cackle.

@PremiseTester: lighten up u miserable twat﻿

lol, would like Jason﻿ Borger to watch this, and see what he say.

Love the fact so﻿ many people don’t seem to understand that this is you guys havin a laugh. Awesome videos guys, keep it up…we want more!!

Those casts are the most﻿ ridicoulous casts I have ever seen!

you are stupid and you wasted my time

You all need to pull your fingers out of your assholes and take a chill pill. This video is obviously lighthearted, and if you fail to see that, you must be a﻿ horrible person to go fish with. Christ, what ever happened to personal style and taste? Have a laugh, dry out your waders, and stop being so damn negative and critical.

i﻿ tried this casting method and ended up travelling back in time 2000 years.

It is hard to pick a winner, but the final comment by “johnkay33” really stands out. 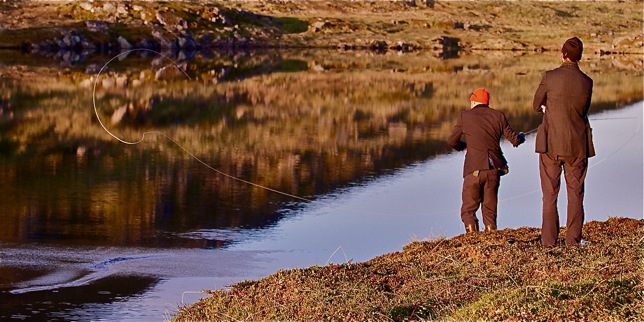 And here´s the video again:

If you´re still up for more Shadow Cast stuff, click here to see Jason Borger´s thorough analysis of the J&FF Shadow Cast, British SC-discussions, and much, much more.

PS! If you wanna see the video on YouTube (there are new, entertaining comments coming all the time), click here.

What’s the point of all the splashing and movements? Maybe impressive for non-flyfishers, but for us flyfishers…; Funny stupid thing to do.

KJetil: That is exactly the question we were trying to answer with this video;)

hahaha…these comments gave me a good laugh and convinced me to take part in the competition next year…just to give more room for fertile discussions amongst the pro’s on youtube:-)