Tapani´s recent Shadow Cast video really hit the spot! It´s been picked up by lots of blogs and websites around the world.

Sadly, a lot of people worldwide seem to misunderstand this new, improved Shadow Cast. It is not a joke. And it certainly isn´t a parody. It is a really serious cast, made by serious fly fishermen who cast their flies in a serious manner. Wearing serious facial expressions, they catch some serious trout.

The only people who understand that our Shadow Cast is totally serious are some people from a British fly fishing forum. And that´s a bit strange, since the British always tend to joke a lot, and are known for their sophisticated sense of humour. You would think that they would be the first to joke around with the Shadow Cast. But no, these guys really understand.

Just have a look at some quotes from the British forum:

“i hope you dont mind me saying but this was the worst demonstration i have ever seen of what is actually a very functional and beautifull cast.”

“…it makes the cast look stupid, if you look at Micheal Mauri’s or Stefan Dombaj you will see the components of the cast performed correctly, most importantly the rod tip rising to form the D loop without which the cast cannot work.”

“…i’m sorry if this sounds harsh but performed without skill these casts look rediculous and they are not.”

Well, what can I say?

We are of course thrilled that at least some people out there take us seriously.

But I have to admit that this harsh critcism really hurts my feelings. Seriously. 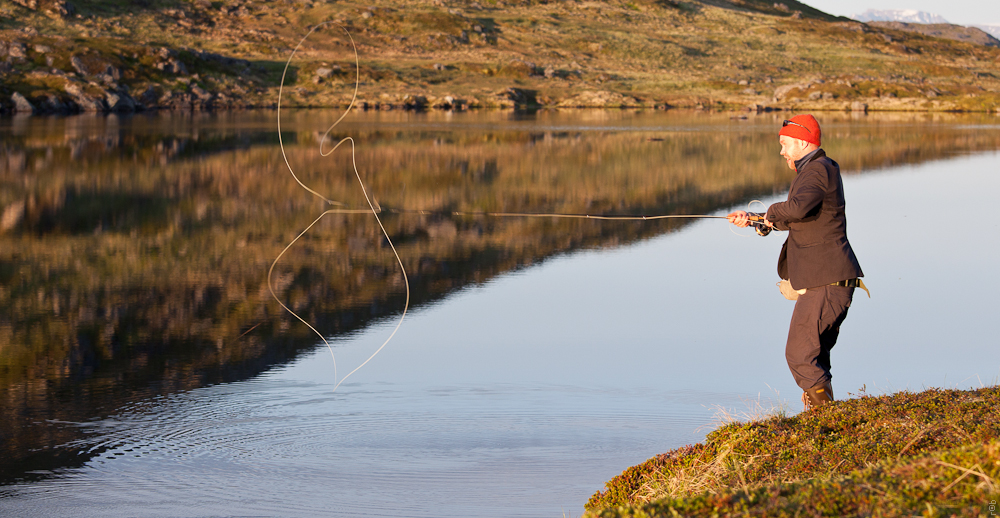 It’s happened before in history, that when something revolutionary is introduced, it faces criticism and laughter. It is my belief, however, that the New Shadow Cast will find its supporters. I for one can say that I practice and use it regularly.

Next season I am going to use this cast only… + drive on left side only.

LOL, lol, lol! The most ridiculos fly cast I have ever seen. This is for the most conceited or the biggest fools…

… for a serious comment it could be that my english is much too poor … i like to apologise that!

I guess there is a huge missunderstanding of your amazing further development of the shaddow cast … in the kind of your presentation.

Let’s have a detail look to Michael Mauris DVD …

1. do not smile or laugh .. that’s ridiculous and definitely not serious

1.2 your face should look like as if you are on your mothers funeral

3. wear sunglases … that’s so important … Håvard is on the right way

4. Very, very slow motions with a lot of water drops in the air …

5. your wading stuff is impossible …

6. you need some exciting background music … for example:

6.1 in the german version: some Wagner stuff

6.3 at least for the british version: “God Save the Queen” the national anthem

Nice video, but what I have enjoyed the most are the comments on the british forum. :^)
Thanks.

Thomas – thanks for the suggestions, we’ll keep all that in mind for the upcoming videos!

I always like difficult practical useful casting techniques. My self normally use this cast for polar beer fishing with my #2 7’9” rod.

PS I forgot to tell I only fish for polar bear to get some nice fly-tying material. Sorry