I just came back from a small album release tour in Finland. That was with not with Jazz & Fly Fishing (JFF), but Joona Toivanen Trio (JTT), together with Tapani on bass, and the drummer Olavi Louhivuori. We had a great time and played concerts in Helsinki and Jyväskylä. It was fantastic to be back together and play with the trio after a long break!

I also have finished a new composition for big band. It’s called Views and Visions, and will be performed by Jyväskylä Big Band (JBB). I just realized I’ve finished most of the big projects this year, and there’s actually some free time in my life! After writing this blog post I will move my ass two meters to the left and start tying flies for the next season. It’s very handy to have the fly tying corner and the office table right next to each other! 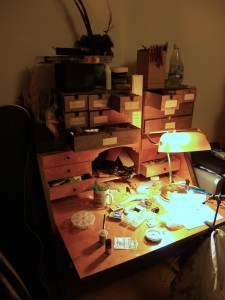