With 2012 on the doorstep, here are some of the highs (and lows) of 2011, seen through various camera lenses:

Last christmas, Tapani and Joona decided to saw a big hole in the ice of the lake outside their cottage in central Finland. Then they did some really strange: First they sat for hours in the ridiculously hot torture chamber they call sauna, and then they went swimming in the whole in the ice. Go figure.

In January, we met up in Gothenburg for a planning/rehearsal session. Fredrik had caught some nice perch icefishing on the frozen Göta Älv, and prepared a delicous perch soup for us. There was also some wine and 78-records involved:

In february, we released our debut album, Slow Walking Water. It recieved excellent reviews from the critics. You can buy it here! We played a release concert at Parken in Gothenburg, and our friend Damien made this excellent video from the show:

Winter is a good time for editing videos, and in March, Tapani finished the edit of the second part of our 2010 Sight Fishing adventures. One of our very best web videos, if you ask me:

April started with a quite successful April Fool´s Day hoax. And a few days later, during our Season 2 sea trout sessions around Gothenburg in early April, Joona made this short horror video with his iPhone 4 and the 8mm app. It captures the true essence of spring seatrout fishing in an excellent way:

In mid-April, Joona, Tapani and Fredrik went to the Fishing fair in Jönköping, tried to sell jazz CDs to fishermen, and filmed the whole thing. They also asked a lot of fishermen the quintessential question: “What is your biggest fish?”

Later in April, I went to a splitcane gathering hosted by Oslo fly fisher´s Association. It was a true joy to cast rods from such masterful builders as Vidar Steimler, Geir Rud and Sigfred Mittet. Click here to see the post – lots of pics of happy people experiencing the joy of casting with a modern splitcane rod.

In May, a really cool article by Fredrik was published in the Norwegian magazine Fluefiske 2011, and we publised some left-over video material from 2010 – one video with a really nice trout, and one with a serious monkey wrench:

June was a big month, as usual. Joona told us the true story of how he became a fly fisherman, and I experienced some serious strike problems up north:

June ended with Joona and Fredrik catching some serious sea trout outside Gothenburg (so it is possible, after all).

Early July: our album debut Slow Walking Water was chosen album of the week in Euro Jazz radio, and we launched our first Shadow Cast Competition:

The rest of the month was filled with exciting fishing trips, including a serious J&FF expedition up north, and there wasn´t too much happening on the blog.

In August, the Shadow Cast Competition entries started coming in, and we did an interview with the Polish magazine Jerkbait.pl. Tapani did a great video for the award winning vocal group IKI.

I went fishing up north, and came across two very different trout, one that was totally apathic, and one that was more than willing to dance:

In September, we went touring in France and Poland. We had the best time ever, met lots of really cool people and got huge amounts of material for our ongoing film project, Season 2. The area around San River in southeastern Poland was particularily beautiful.

Back home in Norway, Lars Nilssen from the Norwegian blog larsoglars.no and I travelled to Savalen, Norway to watch the arctic char spawn. Some incredible sights!

Joona delivered another iPhone 4/8mm app video, this time featuring Fredrik performing his spontaneus Shadow Cast composition “”The Man I Want to Be”:

In November, I did a little story about the mysterious Bibio Pomonae, an insect that appears out of nowhere in biblical amounts and makes the trout to go completely mental. A few days later, I caught several huge rainbow trout a couple of hundreds meters from my appartement in central Oslo.

As you might know, we´re currently working on a new film project, working title Season 2. Tapani made this edit from the first material we shot during winter and early spring 2012. The new film is up for release in February 2013:

This Is Fly is a really cool publication that brings an alternative perpective on fly fishing. I did an article about us for the December/January issue (#32).

On the 6th day of December, it was time for Head Judge and Grand Shadow Master Jason Borger´s final verdict in our epic Shadow Cast Competition. 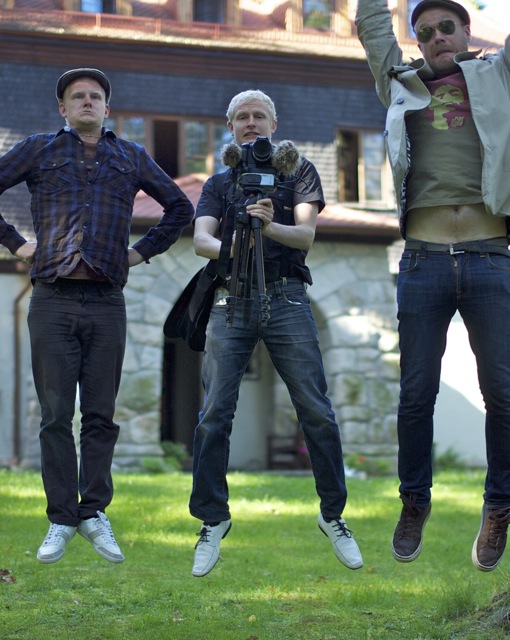 Next year is full of constantly changing, exciting plans. Stay tuned, and: