Lots of exciting stuff happening at the moment!

Soon, we´ll meet up in Gothenburg for another recording session. The plan is to record soundtracks for our films + maybe some additional tracks for our coming album.

Oh yeah, the album. Preliminary release date is mid-March 2011, roughly. We´ll get back to you on that. The album release will be followed by a release tour in the Nordic countries, with screening of some Jazz & Fly Fishing highlights before the concerts.

Fishingwise, the season´s end is drawing closer, but we´re trying to squeeze in a trip to Bornholm for seatrout before the curtain drops. I´ve seen some pics from the late autumn fishing there, and the November light looks fantastic – as does the big seatrout, which supposedly can be found close to the shore at that time.

We´re currently considering several exciting destinations for next year. Tours with concerts and fishing in Bosnia, Russia, Iceland and Down Under are on the drawing board for next year – it´s really just about finding the time to do all the stuff we want to do.

We also have some serious plans to go for the ultimate Nordic freshwater challenge – sight fishing for the 3 kg+ arctic char. It´s not gonna be easy, and we might end up spending a week in the mountains catching absolutely nothing (been there, done that). These places hold a few very big fish, and you don´t get many chances in a week´s fishing. And the weather will of course mess you up all the time. But if it had been easy, it wouldn´t be as much fun. At least that´s what I try to tell my self every time I fail miserably. Some serious salt water fishing and pike fishing is also on our agenda. And lots of other stuff, too. 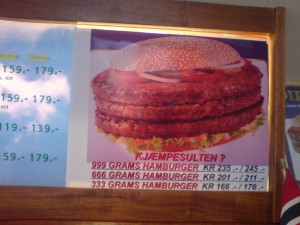 This is the biggest hamburger we´ve seen on our tours.
It´s from Bogen in Northern Norway. Has anyone seen a bigger burger?
Send pics of huge burgers to us!

Actually, YES, I´ve seen a bigger burger. The Boggi Burger at Roskilde Festival comes from 320 g to 1260 g 🙂 I do think 999 g is plenty for anyone though.

No, I didn´t eat it… If i remeber correctly it was pretty costly, like the one you posted above.

Today I would´nt have hesitated though!