11:00 Finally! A river! A river? The lady at the hotel never mentioned any river when I asked her about the map and my planned route. Let’s take care of that problem after some water. I basically fell down to the ground, dropped the back pack and slid down to the water’s edge. After a couple of liters of the cold water I stopped drinking and rested on the ground for a while. My energy came back. Then I looked out over the river. “I shall cross it” I said to my self and started to look for a good place to cross the water. I walked along the river upstream for a while. I have to say it didn’t look too good. Just when I was about to turn and walk downstream again, something hard hit me in the side. I froze to ice when I realized that I..

.. yes, isn´t that a hell of a cliffhanger, wouldn’t you say? What happened after that moment. Do you really want to know? Do you have the guts to find out? Think before you read the text below, it might change your life! Or not. Lets see.. if something happens to you this week that will change your life, it must be because you red this text, right? Well, just you wait and see! Alright, where were we.. oh yes, right here..

..hit me in the side. I froze to ice when I realized that I.. suddenly became an ice cream, now isn’t that strange? It was one of these very creamy french homemade ice creams and I could smell pure vanilla when I was walking in the sun. Since I by then was an ice cream, I didn’t understand much, the brain was very cold you see. But what could I do? I knew that I had to continue the walk otherwise I was fried. Nobody likes fried ice cream. After a while I found a good place to cross the river and since the water was very cold I didn’t melt away.

15:00 When I arrived to the magic area where I was supposed to put up the tent I tried to eat a small piece from my self. It was kind of hard in the beginning but after some minutes I got into it. After about one hour my feet were gone and later during the day i ate my left leg.

Day 3, 07:34 Woke up outside the tent. Was very hungry and started almost immediately to eat from my ice-cream body. When the sunset came, all that was left from me was the head. Fell a sleep, totally helpless when thousands of mosquitos attacked me.

Day 4, 11:06 The rain was falling on my poor head. Tried to drink in order to survive the melting sun that was supposed to show up this day. The sun never came.

Day 5, 09:00 Man, I was really hungry at this time. You see, it is not easy to eat when you only have your head. Then I realized that I was surrounded by mosquitos. Revenge! Finally! After a couple of hours, at mosquito number 230136 , I stopped to count them but continued to eat. When the nightfall came the fish started to rise. Big and heavy rises all over the lake. The head went to sleep.

Day 6, 08:00 Time to go home. actually I only had four hours to get to the small buss station 18 kilometers away. But how was I going to move my self. If you knew what it feels like to be only a head made of ice-cream you would understand my trouble. Suddenly a strong wind from east moved my sweet head. I fell into the lake and started to drift. After a while I learned how to swim backwards by shooting air with my mouth. Don’t ask where the air came from, it worked any how. I swam through huge lakes and small rivers. Man, huge char and trout were passing me many times. When I reached the bay close to the buss station, a friendly old man asked me if I needed help. I told him that I was i a terrible hurry so he took me under his arm and ran towards the buss.

All of this isn’t true as you might guess! I didn’t eat that many mosquitos as I said, it was more like 200 or so. Sometimes it sounds better with a little lie! Thanks for reading this almost true story. Now I’ll go and grab a beer, cheers! /Fredrik 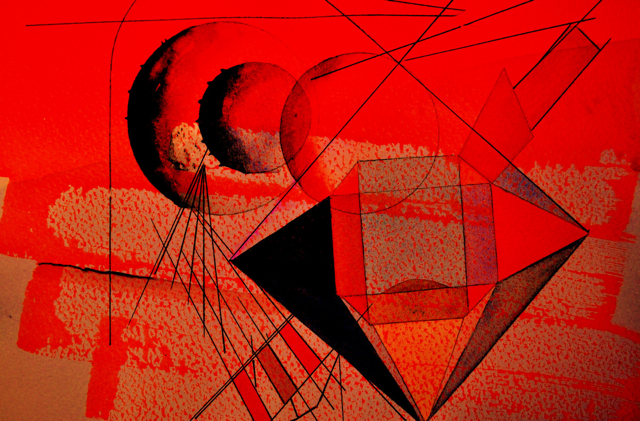 Fredrik, are you OK??? I got worried while reading that stuff.
Nice picture, did you paint that?

Some serious mushroom trip, Fred. I love it!

Yeah, sounds like a hell of a trip, i bet you did’nt even leave your apartment haha