As you can see by clicking the “jazzcam” tab above, the quality of the band´s own behind-the-scenes videos leaves something to be desired…

Well, that´s about to change. The last few days, I´ve spent most of the nights online, trying to find a camcorder which suits my budget and ambitions – and what a jungle it is out there!

There seems to be thousands of more or less similar camera models on the market, and all the manufacturers are of course claiming to have the best mumbo-jumbo technology that makes all other cameras obsolete. Searching for camera test videos on youtube or vimeo doesn´t help much either – these videos all feature some geek packing up the camera from the box and then filming some totally useless crap in his backyard. Not helpful.

This is how I look now, after spending way too much time trying to figure out which camera to buy: 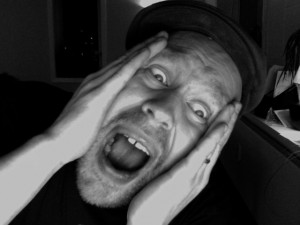 To make matters even worse, all the technical camera stuff is totally jibberish to me. It´s all about strange letter combinations and lots of random numbers. And then there´s all the extra stuff you need – lots of weird, shockingly expensive little gizmos – not to mention a brand new computer to deal with the ridiculuos amounts of data that the camcorder spews out. I´m slowly but surely realizing that I´m entering a whole new world of pain.

The good news is that when I´ve worked my way through this personal hell, there will be brand new jazzcam video clips of the band playing and fly fishing popping up like mayflies from the Upper Itchen. Joona has recently invested in a new sports camera which shoots in HD, and Fred has his trusty Nikon D90, so if we can just figure out how to upload videos to youtube, we´re pretty much good to go…

The band´s own jazzcam video clips will of course always be total amateur stuff shown only on this blog, but I´m a strong believer in learning-by-doing, so if you bear with us for a while, some half-decent stuff might appear eventually. You never know. Stay tuned!

Man, that photo is scary similar to Edvard Munch’s “Scream”…

Well, that´s what existential angst will do to you… And good old Edvard probably had it even worse than me.