Except for Fredrik´s Santa Claus pics (check out the “Stupid Stuff” gallery), we haven´t really had any horror on this blog. So here´s some really scary stuff for you: 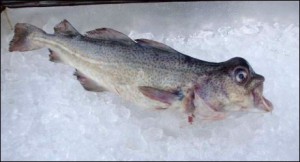 Most likely, these horrible creatures are the result of selective breeding to improve the growth rate of the fish. There has been attempts to stop these images from being published, but with increasing numbers of escaped “Frankenstein cod” being caught by fishermen, containing this scandal has become impossible.

The really bad news is that they recently caught several of these freak fish in Lofoten – the main spawning grounds of the arctic cod population – in the middle of the spawning season. And most likely, these monsters-on-the-run are not sterile, either.

The cod is one of the most important food resources in the world, and an economic cornerstone for Norway, Iceland (tough luck for them at the moment, or what?), Russia and many other North Atlantic countries. Nobody knows what will be the outcome of this mad experiment, but this makes me scared and very angry.

Why do the Norwegian authorities let this happen? Why do they allow the fish farmers to gamble with this unique, totally renewable resource?

I´m having a hard time finding any sense in this.